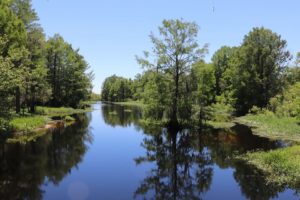 I have a message to share with you today that I would not have believed a few short years ago but in our lives, it is more difficult to disbelieve than it is to accept as the truth.

I am not sure how much you believe God reaches down and directs the everyday things that happen in our lives, but I know I have been amazed at what has happened in Lori and my lives.

Let me give you a quick history of our story, so that you might understand where we are coming from. A few short years ago, both Lori and I had fairly good jobs, we weren’t getting rich but we were making decent money. We had money in the bank, we owned our own home, our vehicles were paid off, our credit was good and we were able to pay our bills without much worry.

The first thing that happened was that Lori’s department was going through some major changes and they were restructuring everything. Unfortunately, Lori’s job basically got restructured right out the door. Not a great time but I still had my job and after a few months, Lori was able to find another job although making approximately half as much.

As all this was happening, a medical condition that I had had for some time, which was then undiagnosed, started to worsen at an alarming rate. A job that I enjoyed and was pretty good at, was quickly becoming more than I could handle. It not only affected me physically but also cognitively and mentally. I could no longer focus well enough to keep all the aspects of my job straight. My everyday memory was getting worse and worse; there were times when I could actually see a difference from one week to the next. I worked as long as I could, but it was becoming very apparent that I was no longer able to keep up with the duties of my job. I spent some time in denial, some time in serious depression and anxiety. Eventually my annual contract wasn’t renewed and for good reason. I could no longer accomplish what I was getting paid to accomplish.

Those were some pretty dismal times and I wish I could say that I stood strong in my Faith, but the truth was that I faltered greatly. I found it very hard to trust that there was any plan in place that was going to lead anywhere that we wanted to go.

Lori, my wife, is a wiz at robbing Peter to pay Paul and she kept us going financially for a very long time.

We had tried to come up with some ways that I could make some money, any money but the reality was, and still is, I am really not able to do anything that will provide any sort of steady income. Our financial situation began to deteriorate at a faster and faster rate. We started selling off what we could but nothing we tried really amounted to much.

I applied for disability and was promptly turned down. That’s not surprising because I had no real diagnosis yet, so I couldn’t really even explain what was wrong with me. I could list the things I could no longer do but not why and not backed up by much of anything that my doctors could agree about. Time went by and things were going from bad to worse.

I finally found a doctor or two that could start to unravel the mystery of exactly what was going wrong. Lo and behold, I finally got a diagnosis and we hired a lawyer to deal with disability. But everything takes time, excruciatingly slow moving time. Of course out in the real world, time was moving along at what seemed like a pretty good clip. We were falling further and further behind in everything with no respite in sight.

Those were dark times, but we started noticing something pretty amazing. When we were down to our last dollar and there were still things to pay or food to buy, always at the eleventh hour, something would happen. Something would sell that no one had been the least interested in. A check from some long forgotten source would turn up; a friend would walk up and tell us that God had put it on their heart to help in one way or the other. Friends that would step up and help when we most needed it. So many of these things happened that I am not sure we could actually list them if we tried but when we most needed it, funds would turn up.

We had a great disability lawyer that assured us that eventually, I would get disability. We had a great bankruptcy attorney that guided us through and assured us everything would turn out okay. Even with all this, it was still about the most anxious and difficult times that Lori and I had gone through as a couple.

Through all of this, we both, prayed fervently. We both asked God to lead us through this dark and scary time. I can’t speak for Lori but I can tell you, although there was an underlying part of my soul that somehow knew we would make it through, day to day life was pretty close to exactly the opposite of that. It just seemed that there was an impenetrable wall that we kept coming up against. Time dragged on.

Eventually, my disability hearing came up and, though this is rarely done, we left the hearing knowing I had been approved. After 3 1/2 years we were basically offered back pay of 24 months and there was no question that we would take it. The fact that they wouldn’t go back 3 1/2 years presented a few problems. We could probably rescue our house out of foreclosure but because we were unable to spend anything on the upkeep and maintenance in all the time I was out of work, we would be starting out in the hole. By the time we got it out of bankruptcy and then paid for the repairs it needed, we would have spent all of the back pay and then some. It was then that things started to get real weird.

My sister and brother in law had been in the military and fallen in love with traveling. They were planning on giving up their apartment, selling what they no longer needed, purchasing a camper trailer and starting an adventure of Rving full time. At first, after all the stress of the last few years, I thought how great that would be if we could afford it but our reality at the time was that we were barely going to be able to get our home out of foreclosure, a new life on the road wasn’t anything that seemed even remotely possible. In conversations with my sister and brother in law, we started to learn that it might actually be possible to do and in fact, it might actually turn out to be a much better solution for us then rescuing the house. This crazy idea actually began to show itself as our best choice.

So many things started to fall into place, that we began to feel like we were being shown what we should do. Of course, we could have decided to do something else but thinking of doing anything else felt like we were going against the tide. Thinking of doing anything else just felt wrong. Looking back, we realized that there were a lot of instances where, we might not have been forced to go a certain way, but it sure seems like we were being funneled into a path that lead us to where we are today. Which is, living in a beautiful little used camper, waiting to hit the road!

There are so many more bits and pieces to our story, and we may share more about that later, but the main part that seems the most important is that God provided in every instance when we really were at the end of our resources, when we were completely out of ideas. Though we could have made different decisions, every sign post sure seems to have pointed us in a particular direction. Time will tell if we’ve made the right decisions but things continue to fall in place to make our new life or our Next New Normal the only path that makes any sense.

3 Replies to “How We Got Where We Are (Our Story)”