Up until a couple weeks ago, our adventure had been put on hold. We were in our camper and it wasn’t parked in our driveway anymore but because of Covid-19 and one or two other things, we were in a holding pattern.

Thank God we have family, wonderful friends and a church that helped us stay on track, even if it was a little stilted and delayed. We were sort of halfway there, if that makes any sense. We were holding the whole puzzle but not all the pieces were in the right places.

Then, just as it was feeling like we were in a never ending holding pattern, the last pieces of the puzzle started to drop into place. Excitement and anxiety ran hand in hand with us, but, at least we were running in the right direction. At least we could see the real adventure and it was about to begin. 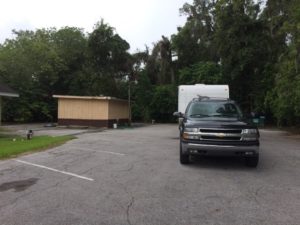 We loaded everything into what would be our working configuration, for the time being anyways, and hooked up the camper to the Burb. It was a most glorious Sunday morning, yes, a little wet but glorious all the same.

Our first foray into the future was a fairly short trip but that was the plan. A first little hop that would be our shakedown cruise and alert us of things we had not thought of or provided for. Happily and thankfully, there was very little that didn’t work as it should and we arrived at our first destination, Crystal Isles in Crystal River, Florida. There is a proper park review in the works but, though it was quite a busy park and a fairly stressful step for Annie the Cow Dog, it worked. IT WORKED! 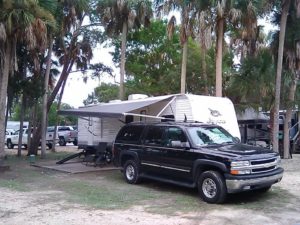 We were there for five days, again, it was a short shake down cruise and it worked wonderfully for it. It is the Summer in Florida, Crystal River is on the coast, so it was relatively hot, humid and wet but it worked. That was the important part. It was also the beginning of the scallop season, something we were unaware of until we landed in the middle of it. Note to self; research local happenings before making reservations. 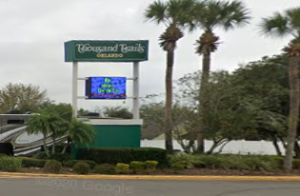 We left Crystal River on the Next Friday and headed for destination number two. This would not be a shakedown cruise, this was three hours, again in the rain part of the way, to a mega park in Clermont, Florida. We will be in this park for three weeks and then shift to another park just down the road for two more weeks.

The adventure truly has begun. The reality of it is sinking in and we are certainly smiling a lot more, still finding our way in a big new world but looking forward to what is yet to come. One more step on our Next New Normal path. One more chance to praise a God that has taken a disaster and made it into a life that we would never have thought possible. A path of despair that has lead to a new beginning, a new chance at life and a most exciting Next New Normal. God is Good! 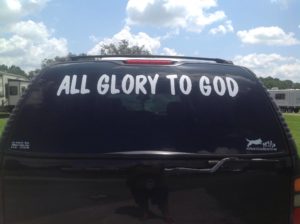 9 Replies to “The Real Adventure Begins”